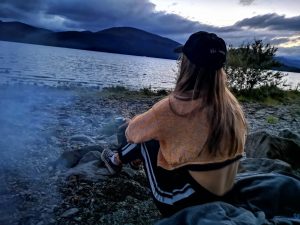 Scottish gal exploring Oz with a love of sunsets, wildlife and mexican food

I write this blog post 3 months into my Australian adventure.  A lot has happened since I flew over at the end of October last year.  Let me take you back to earlier last year, I think it was May.

My best friend, Max.  The first dog my family had; he was there through my highs and lows, and was put down due to cancer.  Depressing start to this post huh?  Anyways, his passing flipped a switch for me.  I was ready to go for it and do something I had wanted to do for the past four years  where I struggled to get through higher education – I hated it.  I applied for my visa, booked my flight and worked my butt off in a hospitality job to save enough money to fund this trip.

Fast forward to the last week in October which I spent saying goodbye to everyone I like and my new puppy which i LOVE.  No I kid, I love everyone I said goodbye to, it was an emotional farewell.  The flight was long and slightly uncomfortable.  The plane food sucked.  The movies were good and new.  No episodes of Bob’s Burgers though, much to my disgust.

I landed in Australia and it did not feel real.  My auntie picked me up and I sat and day dreamed, blocking out everything she was saying.  It was weird.  My family – the family I had not seen in ages – lives in Sydney, where I would spend my next 2 months of my trip.  It was great to meet and catch up with this part of my family I literally knew the bare minimum about.  Two months is a long time to stay in one place for but I enjoyed the time I spent there.  It was a huge adjustment regarding the climate and the time difference.  I did and still do get home sick but I’m not one to allow those sad feelings take over my experience.  I just get on with things.  Forever looking to the positive side of things – most of the time.

Sydney is awesome.  The first time I ventured into the city I had no idea where I was walking.  The roads are so confusing.  They all intertwine with one another and it is difficult (if you’re a newbie) to navigate yourself around.  I ended up walking through circular quay, where I had my first glimpse of the famous Opera House.  I walked closer and saw the Harbour Bridge.  Honestly, it is a moment I won’t forget.  I’m not sure why but seeing those two famous landmarks was special to me.

I also ventured west to the Blue Mountains, something I wanted to see before I landed on Australian soil.  It was awesome.  I highly recommend checking it out.

I had my first birthday and Christmas in Sydney which was an odd time for me but I enjoyed it as best I could.  I spent my birthday by the pool topping up my tan and then out for a meal at my favourite spot in Sydney – Darling Harbour.  There is something about that place that I just can’t help but love.  It is somewhere you should definitely visit if ever in Sydney.  Christmas was also spent by the pool however I was surrounded by loads of family and even more booze.  I don’t think I’ve drunk more during the festive period.  Booze was a daily thing accompanied by games and laughter.  Once Christmas had past and the house slowly became quieter and quieter I decided it was time to explore more of Australia and the place I really wanted to visit next was Melbourne – where I currently am.

I flew to Melbourne the second week of January thus beginning my huge blow to my funds.  A quick note to anyone wanting to travel: hostels are the ‘cheaper’ option but they are NOT cheap.  Hostels are currently destroying my funds and it doesn’t help that I am struggling to find work.  Apparently a lot of people are in the same boat as me.  Another note: finding employment is not as easy as you think it will be.  I thought there would be plenty of jobs going in Australia.  It is NOT the case.  I have found that hardly anyone is hiring.  I think it is maybe due to the period I have decided to look for one – Summer.  Bad move on my behalf.  However if you love animals and want to make some cash you should sign up to be a house and pet sitter.  I signed up and created a profile through the website Pawshake (https://pawshake.com.au) and have had a couple of gigs.  The best bit about it is you get to have a lil furry friend to hang with and depending on why you’re needed you can also stay at someones property for however long you’re needed.  Free accommodation!! Trust me this is the best gig you will ever get from becoming a pet sitter.  You can earn money whilst not spending any on hostels – a dream!

Left: Bagel the Cavoodle.  Middle: Archie the French Bulldog.  Right: Mo (I’m not sure what breed)

In the past three weeks I have seen – I think – most of Melbourne city centre, St Kilda, Brighton and have stayed in a ‘hostel’ that was basically a large dirty house.

In the next couple weeks I have a lot planned which I am looking forward to.  I have someone from back home coming over for three weeks which will be great!  I’ll show them around and during the week beginning the 4th we will be road tripping from Philip Island to the Great Ocean Road seeing as much as we can along the way.  I’m super excited for this and so ready to ‘rough’ it along the way.  I will be sleeping in the car for most of our time with the rental car.  All I will be thinking of whilst doing this is – FREE ACCOMMODATION.  It has honestly gotten to that tragic stage where I will go to extremes to make sure I don’t spend any money.  Yay, aren’t you so happy for me?  I sure am living my best life…

I will be updating you all on my aussie travels weekly depending on my access to wifi.

TTYL (Talk To You Later),

3 thoughts on “Where My Australian Adventure Began”

Check Out My Posts Via My Categories

The Art Or Endeavour Of Being Lucid In A World We Live In... Secrets Of The Psychics... Energy, Universe, Futurism, Film, Empowerment...Digital Abstract Art Rendering...